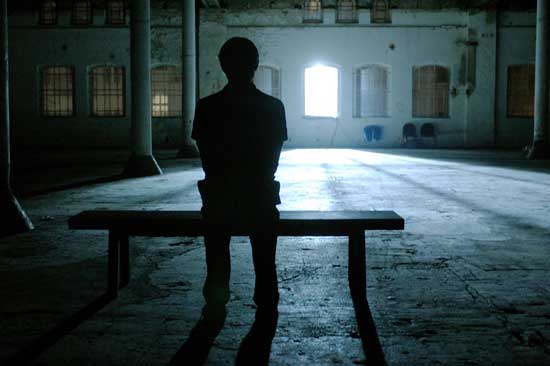 On the night of 13 July 2002, the Schönfeld brothers and their friend Sebastian
Fink killed sixteen-year-old Marinus Schöberl, after first humiliating and
beating him. Inspired by the film American History X (1998) they broke the
helpless young man’s neck by kicking him in the back of the neck. The murderers
and their victim came from Potzlow, a village sixty kilometers north of Berlin.
Four months later the threesome was charged. During the trial the media
portrayed them as right-wing extremists who came from the socially desolate
eastern part of the country. The director decided to burst this media
explanation, and with the aim of examining their deed as the end he set out for
the village to again record the testimony of everyone involved in the event. He
re-examined all the records of the investigations and the court proceedings.
The result is the minutes of the event. Its authentic content was transferred
into dramatic form with the aid of two actors. This produced a documentary drama
performed in the stark backstage wings of the Maxim Gorky Theatre in Berlin.
Veiel then put the suggestive performance on the screen. The film highlights
the minimalism of the performance; it contains nothing that could distract our
attention. Der Kick goes to the edges of this genre. However, the documentary
offers its own detachment, which allows the issue to be viewed primarily from
an analytical perspective.